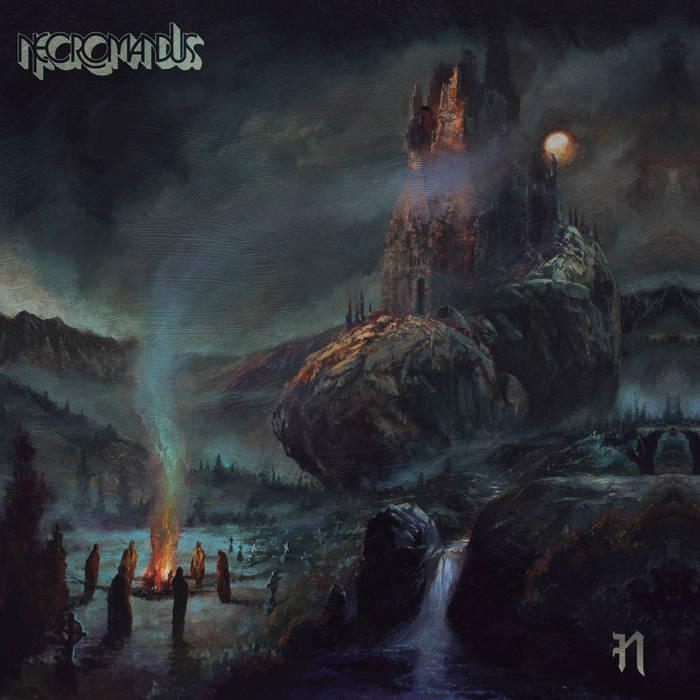 paul rote Their unreleased seventies album was amazing!
Can't wait for this !
They were a progressive Black Sabbath!

The tale of Necromandus always deserved a happy ending. For too long their mysterious name was associated with missed chances and broken dreams; a young band with such potential, cruelly kicked into the long grass of musical obscurity. It had started so well, in that magical wellspring of British pop culture, the late 1960s, with the joining together of four young musicians growing up in the shadow of the Sellafield nuclear site on the Cumbrian coast of North West England: singer Bill Branch, guitarist Barry Dunnery, bassist Dennis McCarten and drummer Frank Hall. Each had cut their teeth on the local circuit in teenage hobby bands, with names like Pink Dream, Jug, Route 16 and Heaven.

After Frank and Dennis teamed up with Barry and Bill, more band names quickly came and went in time-honoured Monty Python ‘Toad The Wet Sprocket’ fashion. They were initially Hot Spring Water, followed by Heavy Hand, Taurus and even Urinal, until a BBC Radio Birmingham show invited suggestions from listeners. Among the responses were Necromancer and Nostradamus; ‘Necromandus’ was Frank’s inadvertently ingenious conflation, and it stuck. By now the fast-rising foursome were being groomed for stardom by Tramp Entertainments, an agency set up by promoter Norman Hood with Tony Iommi. Iommi and Bill Ward had been crossing paths with Frank since their band Mythology came to Cockermouth in 1968, and Frank’s band Heaven had appropriately supported Earth shortly before the name changed to Black Sabbath. But in 1972, Sabbath’s esteemed patronage didn’t just mean the odd support slot. “Tony said ‘You’re a bit out in the sticks, I’ll get you a house in Birmingham, you can rehearse there’,” remembers Frank, still sounding overawed. “Not only that, he says ‘I’m gonna try and get you a record deal. Get some songs together that you really like, we’ll go down to Morgan Studios in Willesden and record everything.’ I thought ‘Oh my God, dream come true’!”

The self-titled Necromandus debut - and the single Don’t Look Down Frank - were due to emerge on Vertigo Records in the spring of 1973, but release dates were continually pushed back; then suddenly, on the eve of a US tour with Sabbath, Barry Dunnery left the band. Iommi wasn’t convinced that Necromandus could find a suitable replacement, Vertigo dropped the band, and their recordings remained lost and forgotten for nearly 20 years. But what prompted Baz to walk out on his bandmates at such a crucial stage? The classic standby ‘musical differences’ was wheeled out, but the reality is rather darker and sadder. “Barry got really, really nervous and uptight, he just couldn’t do it, it was completely out of the question, and we didn’t push the issue,” reveals Frank. “I think he suffered from undiagnosed depression. He once opened up to me, he said ‘I’ve got a funny feeling in me head, nothing seems a pleasure anymore.’ He said he was going through a ‘vale of tears’. Was he bipolar? I don’t know, but there was a dark side to him, and I learnt to recognise the signs. He was a very spiritual person, and although he looked rock ’n’ roll, he was a proper old-fashioned gentleman. It was a pleasure to know him.”

Three years after Necromandus ended, Frank Hall found himself again playing with Barry Dunnery and Dennis McCarten when Ozzy Osbourne put together an embryonic incarnation of his Blizzard Of Ozz in the summer of 1976. But just as rehearsals got underway with Ozzy, Frank was approached by Phil Collins about playing drums for Genesis. “If I had the foresight to see what wasn’t going to happen with John Osbourne, God bless him, I’d have jumped ship there and then,” Frank confesses, “rather than hang on and put together this mish-mash of songs that weren’t going to work anyway. We were thinking on different levels, Ozzy couldn’t get his head around it, so we called it a day.”

Frank spent the 1980s “going from band to band, looking for really good musicians.” After brief stints with Cumbrian heavy metal outfits Hammerhead and Plateau, Frank moved to London, where one day circa 1996 he was staggered to discover the old Necromandus recordings on sale. “I still don’t know how that happened,” reveals Frank. “Somebody found the original tapes, God knows who or where. We thought they were lost, we used to joke about it. I’ll tell you who told me: my mother! She’d found out that the Necromandus album was being sold all over the world. They hadn’t bothered to track us down or ask permission. I was happy and annoyed at the same time.”

The bootleg versions of the Necromandus debut - by now luridly renamed ‘Orexis Of Death’ - listed incorrect song titles and erroneously tried to sell the band as doom metal pioneers, but they did give this once-forgotten artefact a long-overdue global profile and acclaim, getting the name buzzing on the lips of collectors, connoisseurs and rock archaeologists worldwide. However, by the time of 2010’s official reissue, Baz, Bill and Dennis had all died. These losses have brought priorities into sharp focus for Frank: “The rest of the guys are dead now, and before I shuffle off this mortal coil I wanted to put one more Necromandus album together,” the drummer affirms. His first choice of singer was a crucial link to the past; John Branch was persuaded to front the band as his dad Bill did all those years ago, and when Frank heard John’s first take, those years fell away. “It was just like his dad singing,” recalls Frank. “I started to well up, it was really emotional. One of those moments.”

Furthering the album’s profound emotional impact, the guitarwork of Barry Dunnery has found its way into the grooves via a recently-rediscovered rehearsal tape dating back to the mid-70s, when Baz was writing songs with John Marcangelo, who now plays keyboards in the new-look Necromandus. With the addition of wunderkind guitarist Dean Newton and seasoned bassist Banjo Cunanan, what Frank calls “the reincarnation of Necromandus” was complete, and as if compensating for the 44-year delay, the new album came together with extraordinary momentum. “It happened really quickly, I was surprised,” Frank admits. “We got the right studio, the right engineer, I wanted people on my side that were devout fans, who were really into what we were doing. After that, the ideas just flowed, and that was it.”

You can hear those ideas flowing throughout every minute of ‘Necromandus’. And as with the elegant dynamics of the debut, this band’s ethos is still one of sonic experimentation and atmospheric versatility, channelling ancient and modern energies to produce an extraordinary work that honours the past while opening up a bold new future for a band none of us expected to hear from again. “I didn’t want to do a boring, straight-on rocking, punch-in-the-face-then-it’s-forgotten album. I want these songs to remain, to be remembered,” Frank emphasises. “I wanted to put so many colours in there. I’ve got a group of artists around me, a canvas in front of me and a big palette of colours, and I’m not gonna waste them.”

Bandcamp Daily  your guide to the world of Bandcamp